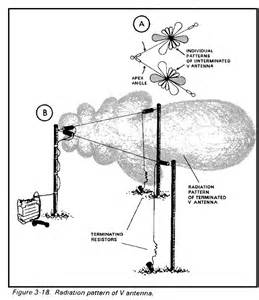 “Did you build that sloping Vee?” Team Daddy asked me.

“yeah Sa’rnt, the long whip wasn’t hitting the TOC from inside these walls.” I replied. The thick mud walls of the compound were hell on a signal, and the makeshift TOC the commo guys had set up on the next ridge was having a hard time hearing us. It was either hang out on the roof in 19 degree cold, exposed, or get out of the wind and put up an improvised Vee out the window.

Not only did it get us at least a little comfort and keep our butts from being out in the open, but it made me look good in the eyes of my betters. I used stuff I had been taught to our advantage- a rare thing these days. Anyway, it sparked a love for making and improvising that I carry on everyday and try to share with you.

A lot of you own an HT and not much else, signal-wise. And that’s ok, its what you can justify within the budgetary constraints we all live within. Generally, all of the HTs out there push between .5 and 5w, with a few doing a little more than that. The truth is this though; antenna makes all the world of difference as to how your signal ‘gets out’. So for that reason, you should work on building your own antennas. All antennas are compromises. The closer an antenna gets to resonance the more efficient it will be at radiating its energy. Theoretically speaking, this is measured by your Standing Wave Ratio (SWR). All antennas have a frequency which they are resonant on- along with a certain bandwidth, or distance between certain frequencies, where they perform best. This is what is meant by the terms Narrowband and Wideband. A wideband antenna will be resonant over more frequencies within a band, while a narrowband antenna will be more efficient on a single frequency. For homebrewing a purpose-built low power HT antenna, this doesn’t make a huge difference.

The most popular HTs out there (of any brand, Chinese, Japanese, dirty knees, whatever…) are at least dual band, working both VHF and UHF, containing the 2m Amateur Band, MURS, and Marine on VHF and 70cm Amateur, GMRS and FRS on UHF. That gives us a lot to work with, no matter what particular band or set of frequencies you rely on. Learning to make purpose driven antennas becomes a great compliment to that piece of equipment, allowing you to do much more with less power (and the satisfaction of building something yourself!).

Remember 936? Yep, still important. 936 is the constant for full-wave antenna length in feet.

And we know that each leg of a Dipole is Quarter-Wave (well, you know now) so,

Don’t skip steps in your math! It won’t turn out right. 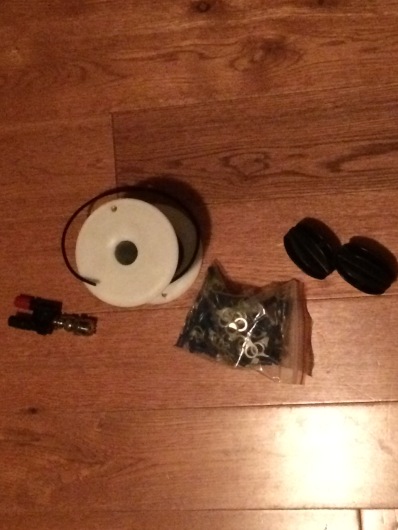 Lets look at the parts we’re gonna use:

Each of the parts aside from the banana post adapter and end-insulators were picked up at the hardware store. The connector and insulators came from a local hamfest.

Figure out your working frequency, and do the math. For this exercise I’m using the 2m National Simplex Frequency, 146.52mHz, which gives me a length of 1.597 ft, or multiplied by 12 to give me length in inches, coming out to 19.16. Give yourself around 21in to attach the end insulators.

Strip the ends, attach and crimp ring terminals so that the connections to the Banana Post will be clean and easy to manipulate.

Attaching the insulators and Banana Post, your antenna is now taking shape. Notice how small it really is? This will disappear into the background pretty easy.

Now let’s go string it up.

This is hard to see, and I’m standing right under it. With a run of coax to the radio and an SMA to UHF adapter, we’re ready to play. It makes a great SWL antenna as well, along with being able to transmit directionally.

So in doing this, we’ve built a homebrew antenna with just a couple cheap parts and a little know-how, as well as building our capabilities and our skills. It can be directional, it can be strung vertically for an omni-directional pattern, and it can be added to or re-configured if need be.

Homebrewing equipment can be some of the most rewarding activities a Survivalist can undertake. Not only does it render a sense of accomplishment not found in just buying something, its also the best teacher. And it might just score you some brownie points with somebody when it matters one day down the road.

No one is coming to save you.